Positive Training What It Is, What It’s Not and How It Works! 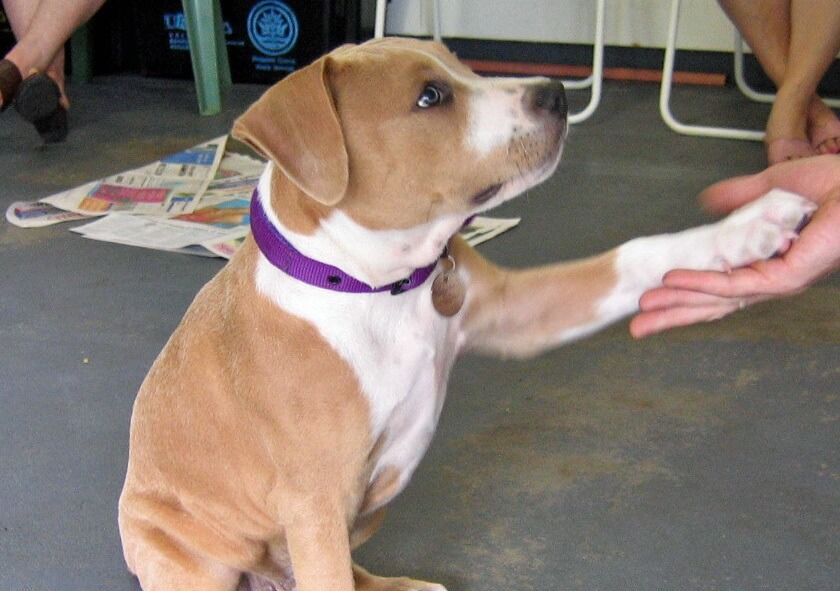 POSITIVE motivational training is the embracing and application of the belief that dogs can and should be trained by the judicial use of rewards alone. It is ‘positive’ because something is added (rewards) and ‘motivational’ because the animal is encouraged to try lots of different behaviours to earn a desired reward.

It is not, the combined use of aversives and positives such as employed by many traditional trainers. Using food or a toy to ‘motivate’ a dog along with leash pops, jerk and pull techniques, verbal reprimands, scruff shakes and other physical manipulations is not in keeping with the philosophy of the true positive motivational trainer as described in this article. The single biggest difference between the two schools is the mind set of the trainer. While the traditional trainer looks to ‘correct’ undesired behaviour, the positive trainer looks only for what the dog is doing right.

The laws of animal learning tell us that “behaviour that is rewarded will be repeated”. This is really all you need to know to successfully train a dog or any other animal. By controlling what happens immediately after a behaviour (the consequence) you can predict whether a behaviour will increase (through reinforcement) or decrease (through punishment). Positive trainers increase the behaviours they want by rewarding the dog with things it wants such as food, toys, games and social interactions (known as positive reinforcement). Unwanted behaviours are decreased by the removal of rewards such as ignoring, time out from training or feeding an unearned treat to another dog (known as negative punishment).

A re-enforcer is by definition, anything which, when presented immediately after a behaviour, causes that behaviour to increase. For rewards to be effective re-enforcers they must be:

The role of food in positive training

Most positive trainers like to use food as a re-enforcer in training because:

Making the most out of your dog’s daily calorie intake

World renowned veterinarian and animal behaviourist Dr Ian Dunbar recommends throwing away your dog’s food bowl forever. Take the same amount of food he would be given for free everyday in his bowl and instead feed it bit by bit, contingent upon good behaviour. Train anything you want but make him work for his dinner just the way nature intended.

Some advantages of feeding in this way are:

Games of retrieve or tug are also high on the list of re-enforcers. ‘Life rewards’ such as having the lead put on for a walk, opening doors to come in or go out or rides in the car can all be used to train everyday behaviours without the use of a primary re-enforcer such as food. The important thing is to know what ‘turns your dog on’ and to make him work for these things rather than give them away for nothing.

Perhaps the most perplexing question in positive training is how often to reinforce your dog for the right behaviour. Here several general rules apply.

The art of positive training lies in the skillful application of reinforcement schedules – withholding rewards just enough to make your dog try harder but not so much as to demotivate or discourage him. In general-a wide variety of rewards delivered unpredictably will ensure your dog stays eager to play the training game.

It is important that whatever behaviour you wish to eventually train is broken down into small, easily achievable, component steps – this is known as ‘shaping’. Each rewardable response along the way provides a unit of information which help the dog understand what you want. Every time your dog gets a step right, he has one more piece of the ultimate behaviour puzzle.

This plays a major role in successful positive motivational training. The dog must be set up for success by whatever means possible so that there is always something for you to reward. For instance, if you want to teach your dog to ‘come’ in the dog park, attaching a drag line is a management technique that will ensure success. By holding the end of the drag s line you prevent your dog from engaging in further exploration and socialisation (natural environmental rewards) instead of coming to you. A reward as soon as he reaches you completes the lesson that coming to you is always the best option.

Reinforcements may be either positive (applied) or negative (removed) – as long as it causes behaviour to increase, it is a re-enforcer. For some reason, it is the application of positive re-enforcers, particularly food which seems to deter many traditional trainers from adopting positive training methods. Traditional trainers most often employ the removal of the pressure of the check chain as their reinforcement of choice and they do so throughout the dog’s life, even into the highest levels of training. If in doubt, watch a few trainers preparing to enter the UD ring and you will see the check chain being applied to reinforce heel position or attention. Yet the application of positive re-enforcers such as treats or games has been misconstrued as being suitable only for beginning levels of training. How often have instructors at dog clubs been heard to say “you shouldn’t still be using food in this class”. They have confused the limited use of food, in sight as a lure, with the use of food after a behaviour as a reinforcement. In fact, the positive trainer reinforcing his dog with a treat or game prior to entering the obedience ring is applying the exact same principles of animal learning as the traditional trainers, except that his preferred choice of reinforcement is positive rather than negative. In both cases, a variable schedule of reinforcement (occasional treats or jerks) needs to be maintained throughout the life of the animal to prevent the behaviour from extinguishing. The suggestion that one method is ‘spoiling’ and the other is ‘real’ training is unjustified, moralistic claptrap. Behaviour must be reinforced to be maintained, it is simply a matter of personal choice whether you prefer to apply a hot dog or jerk a check chain.

Is Positive Training for You?

Positive training will never suit all dog handlers. You must first ask yourself why do I like dog training? What initially attracted me to dog training clubs and competitions? Some people enjoy the traditional ‘man/master- dog/servant’ relationship. They enjoy ‘commanding’ the dog and ensuring that it ‘obeys’. For them traditional training will probably always be the preferred method and provided there is no cruelty involved, there is nothing wrong with that.

Positive training reflects more of a teacher/student relationship. Teachers design the curriculum and lead the lessons, but to maintain a harmonious classroom there is give, take and respect on all sides. The attraction for these trainers is the communication between two different species. The ultimate goal for positive trainers is not ribbons on a wall or trophies in a cupboard, but the development of a unique relationship based on “authority without domination, love without subservience and respect without fear”.

Dogs are perfect at being dogs. They already know how to sit, stand, drop, speak, scent and retrieve. What they have to learn is what our words are for these behaviours and when, where and why they should perform them – this is our choice and therefore our responsibility to teach humanely.

Luckily, with positive motivational training this can be achieved in a way that is fast, efficient and fun for both our dogs and ourselves.

Article courtesy of ©Karin Larsen Bridge – other than for personal use, no part of this article may be reproduced without permission of the author.